The Final Mystery of Inheritance

We’ve all been taught that through biological inheritance we acquire traits from our parents and grandparents as a result of the individual genes that they pass along to us, unchanged, barring rare mutations. But what if your grandmother’s diet could affect your health? Obviously if we accept that inherited = genetic, this doesn’t make sense. Nor does it square with that equation’s so-called opposite, acquired = environmental. But examples of non-genetic inheritance are now too widespread to be set aside as anomalies.

The grandmother effect can be seen, for example, in stressed-out mice. Researchers have discovered that when mice receive a lot of maternal grooming it changes the chemical in their brains that regulates stress hormones. Mice that are deprived of that attention not only overproduce those hormones, they also pay less attention to their own offspring. The changes that bad or good mothering produce in the mice are handed down to future generations, so stressed-out mice beget more stressed-out mice, but not because of their genes.

Some inherited influences result from environmentally induced changes in genes. These genetic alterations, do not involve mutations (changes in the gene sequence), but rather changes to the chemical adornments that attach to the naked gene (think of the naked gene as basic DNA in the form of the double helix). These adornments can fundamentally alter what the gene does, sometimes disabling it, sometimes causing it to be overactive. These chemical adornments are the focus of a new and dynamic field of research called epigenetics.

In Epigenetics, science journalist Richard Francis explores the ways in which this altered view of genes brings us closer to the Holy Grail of developmental biology: explaining how a single cell develops into a unique individual. Inheritance is much more complex than Mendel ever imagined, or James Watson, for that matter. And genes are both more interesting and more mundane than we thought they were.

Francis’s primer introduces a new field. It’s a thorough guide to the many ways in which personality and health can play out through our genes but not be coded for in DNA.
– Christine Kenneally, Slate 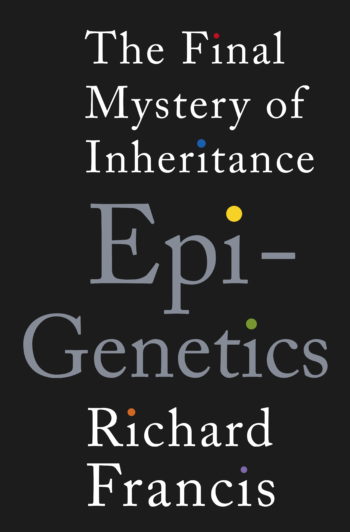