An Enlightened Approach to the Dismal Science

She believes that there is something very wrong with GDP. An economist at the University of California at Berkeley, she has long been troubled by the fact that classical economics measures economic performance exclusively in terms of income and consumption. Growth is all that matters, and economic models skirt questions of values, sustainability and equality.

As a practicing Buddhist for the past seven years, the impulse to ask “How would Buddha teach Econ 1?” was irresistible. Clair Brown’s students, frustrated by having to leave real world issues at the door in order to embrace the notion of perfect rationality, were another inspiration as she designed a new course, Buddhist Economics, that has turned out to be wildly popular at Berkeley since it was launched three years ago.

In Buddhist Economics: An Enlightened Approach To the Dismal Science, Clair argues, convincingly, for bringing humanity – and reality – back into economics. Building on work by E.F. Schumacher, as well as influential economists like Amartya Sen, her approach to economics recognizes that we measure what we value. Classical economics has led us to measure the wrong things; well being is not just a matter of income and growth. Buddhist economics encourages a commitment to equality, to sustainability, and to a sense of responsibility to do what we can to improve the lives of others.

A refreshing, timely, and provocative book, Buddhist Economics will change the way you think about the dismal science.

Revolutionary and urgently needed. This brilliant and beautifully argued book will not only change how you think about the most pressing problems that concern us all, it will inspire you to paths of action that lead to those problems’ solutions. This is a game-changing read.”
—Dacher Keltner, author of The Power Paradox 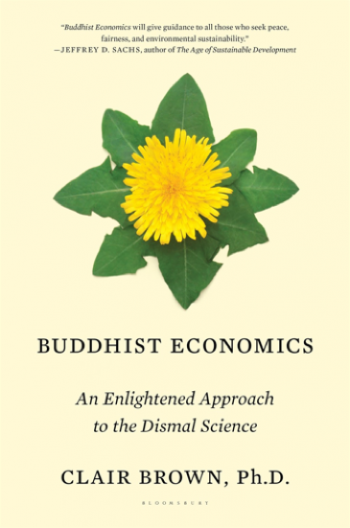