The Dispossession of Native Americans and the Road to Indian Country

If Americans know anything about the deportation of native people in the 1830s, it is usually the story of the Cherokee Trail of Tears, often recounted in maudlin prose in a narrative that is heartbreaking but ultimately of little broader import. The poetic phrase “Trail of Tears” is so familiar that many people conflate Cherokee forced emigration with deportation more generally, even though Cherokees represented a fraction — about 15,000 — of the 80,000 thousand children, women, and men who were shipped west by the Federal government.

In May of 1830, Congress authorized the expulsion of indigenous peoples in the East to territories west of the Mississippi River. Over the next decade, Native Americans saw their homelands and possessions stolen through fraud, intimidation, and murder. Thousands lost their lives. In this powerful, gripping book, award-winning historian Claudio Saunt upends the common view that “Indian Removal” was an inevitable chapter in U.S. expansion across the continent.

Instead, Saunt argues that it was a contested political act – resisted by both indigenous peoples and U.S. citizens – that passed by a razor-thin margin in Congress. In telling the full story of this systematic, state-sponsored theft, he reveals how expulsion became national policy, abetted by Southern power brokers and slave owners and financed by northern Wall Street bankers. Moving beyond the Trail of Tears, Unworthy Republic: The Dispossession of Native Americans and the Road to Indian Country is a fast-paced, yet deeply researched, account of unbridled greed, government indifference, and administrative incompetence. The consequences of this vast transfer of land and wealth still resonate today.

“Unworthy Republic is a study in power. It describes, in detail, the coming together of money, rhetoric, political ambition, and white-supremacist idealism. Saunt shows his readers the cost of a racial caste system in the United States.”
–David Treuer, Foreign Affairs

“”Unworthy Republic” is a powerful and lucid account, weaving together events with the people who experienced them up close.…Saunt has written an unflinching book that reckons with this history and its legacy.”
–Jennifer Szalai, New York Times

“[A] much-needed rendering of a disgraceful episode in American history that has been too long misunderstood.”
–Peter Cozzens, Wall Street Journal

“[Unworthy Republic] is a haunting story of racialized cruelty and greed, which came to define a pivotal period in U.S. and indigenous history alike. . . As Saunt persuasively observes, we have yet to reckon with them today.”
–Caitlin Fitz, Atlantic

“[Unworthy Republic] is a major achievement… [Saunt] manages to do something truly rare: destroy the illusion that history’s course is inevitable and recover the reality of the multiple possibilities that confronted contemporaries.”
–Nick Romeo, Washington Post

Saunt presents a stark and well-documented case that Native American expulsion was a political choice rather than an inevitable tragedy. This searing account forces a new reckoning with American history.
—Publishers Weekly (starred review)

A powerful, moving argument that the state-sponsored expulsion of the 1830s was a horrendous turning point for the Indigenous peoples in the United States.
—Kirkus (starred review)

This valuable addition to the scholarship of Native American dispossession and extermination should be read by scholars and general readers alike.
—Library Journal 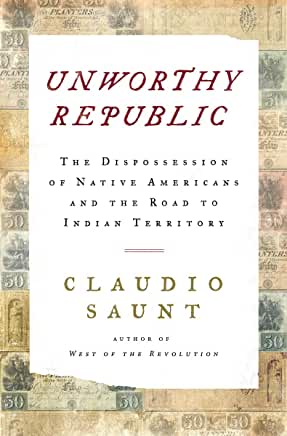