After almost getting expelled for exposing his prep school’s outrages in the Boston press, David Williams spent 1968 crossing the Pacific in the merchant marine and fighting the Vietnam War in the peace movement. Wanted in Oregon for jaywalking, be hitchhiked home to enjoy the mayhem of the Sixties at Harvard where he occasionally attended classes. After a lost post-graduate year, still unexplained, he entered Harvard Divinity School to determine the meaning of the word “God.”

He ended up in Virginia working in a vineyard and teaching full time as a “part-time” college professor at George Mason University where he was honored with the year 2000 “Teaching Excellence Award.” Escaping from the Marxists in the English Department, he spent a Fulbright year in Slovakia confirming his hosts’ suspicions about Americans.

He now lives in Swampoodle, an abandoned black community in a Virginia swamp, writing, grading sophomore papers, and brewing his own bitter beer.

David is the author of Sin Boldly: Dr. Dave’s Guide to Writing the College Paper. 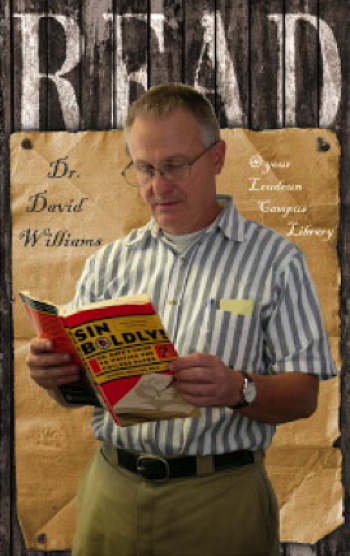